On June 13, the Dixieland Jazz Band gave their first performance at the Hope Care Center in Lehigh Acres. When the band members started showing up, they were worried that they would be too loud for our guests, but were reassured that they were welcome.

The band started in the first wing, where two family members sat at a back table. As they set up, our volunteers started walking from room to room offering cake and ice cream to the residents and families. Staff members closed the doors to reduce the volume a little, but as soon as the band started playing, doors started reopening. Family members came out with big grins on their faces.

Before the first song had ended, every table was full, and there were family members dancing and swaying to the music. People who had turned down refreshments walked up to the volunteers and said “You know, maybe I WILL have cake and ice cream after all!”

There were two little girls visiting their great-grandmother, Barbara, who originally started following the group because of the cake, but they became absolutely enamored of the band, and stayed as close as they could to them. One of the band members plays the washboard, and at one point he let both girls play it, to their utter delight.

After finishing 4 or 5 songs in the first wing, the band traveled onward, with the girls in tow. When the group arrived, two residents were already sitting in the common area waiting for us. All of the band members went out of their way to go over and individually greet each resident, shaking their hands. They even took requests.

After the third song, the little girls’ mother came over to a nurse and said, “My mother would like to come out to hear the music!”

Barbara was too ill to even sit up, so Hope staff wheeled her bed out into the common area – and she was clapping along to the music as she was moved! One at a time, the band members walked over as they were playing and surrounded Barbara's bed, so that they were playing directly to her as she clapped.

Barbara teared up several times, and her daughter asked her why. She replied, “Because I’m so happy!”

The two gentlemen who'd been there all along were asked if the band should keep playing, and they responded with an enthusiastic YES. One asked if they could come back again.

At the same time, the little girls had been playing with their great-grandmother’s white board, and during the last song, they wrote THANK YOU in great big letters and held it up. Including Barbara, there were four generations of her family there enjoying the day.

When everyone was finished cleaning up, the husband of one of our residents stopped on his way out to thank everyone for the party, and said “What a way to send my wife out!” 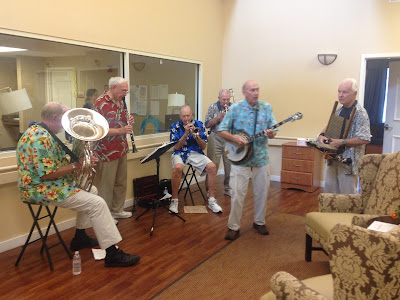 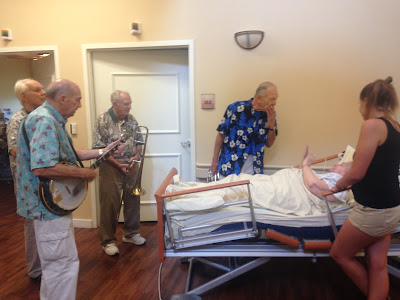 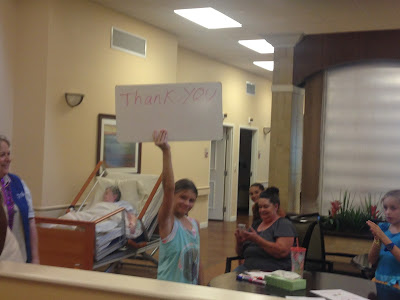 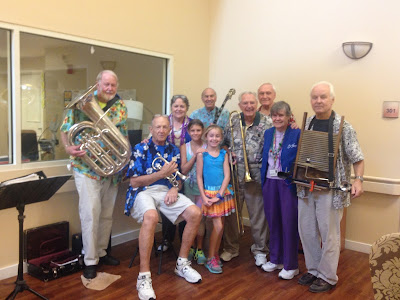 Email ThisBlogThis!Share to TwitterShare to FacebookShare to Pinterest
Labels: Volunteers