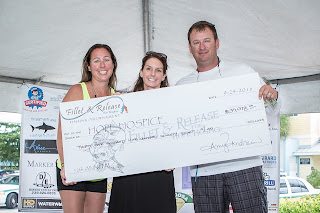 Matanzas on the Bay on Fort Myers Beach hosted the 12th annual Fillet and Release Fishing Tournament, raising $36,000 to benefit Hope Hospice. A total of 104 boats participated in the light tackle, inshore fishing tournament on Sept. 24, raising a record amount for Hope Hospice. In addition to the funds raised through entry fees, the first place and second place teams also generously donated $5,000 and $1,000, respectively, of their winnings to Hope Hospice.

“This year’s Fillet and Release Fishing Tournament was another huge success, with Southwest Florida anglers coming together to help raise a record number of funds for Hope Hospice,” said Glen Petrarca, general manager of Matanzas on the Bay. “Hope Hospice does so much to care for those in need, and we are honored to support its mission by hosting this community event each year.”

Amy Andrew, event coordinator of the Fillet and Release Fishing Tournament, has led the annual event since its inception in 2004 to raise funds for Hope Hospice, a nonprofit organization that has taken care of many families, including her own. The 12th annual tournament marked Andrew’s final year leading the event.

“Happy to say that I went out with a bang my final year. Being able to give $36,000 to Hope Hospice is a great feeling,” Andrew said. “Over the past 12 years I have raised $129,540.00. I feel like I have done my part to give back for all Hope Hospice did for my family. I know my grandma and grandpa would be proud. Thanks to everyone who helped make the Fillet and Release for Hope Hospice such a successful event.”

The winning teams of the 2016 Fillet and Release Fishing Tournament include:


Winners were determined by the total weight of fish caught. Eligible species included redfish and snook, and all fish were released following the weigh-in.