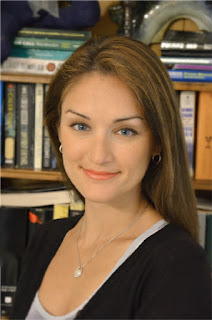 Hope HealthCare Services announces Dr. Amanda Jane Avila as medical director for the Hope Parkinson Program. Specializing in the medical management of movement disorders, Dr. Avila is the first movement disorder specialist to practice locally in Southwest Florida and will assist patients in the medical management of Parkinson’s disease, including tremors, stiffness and balance control.

Dr. Avila will discuss medication management in Parkinson’s disease at the Nov. 16 “Lunch & Learn for Hope Parkinson Program,” taking place in Hope HealthCare Services’ community room at 9470 HealthPark Circle in Fort Myers. There is no cost to attend, and reservations are made by calling 239-985-7727.

An undergraduate of Boston College, Dr. Avila earned her M.D. from the University of Vermont College of Medicine and completed a fellowship at the University of Florida College of Medicine’s Center for Movement Disorders and Neurorestoration. Dr. Avila completed her neurology residency at Brown University and is board certified by the American Board of Psychiatry and Neurology. She has been a junior member of the American Academy of Neurology since 2007 and the Movement Disorders Society since 2011.

The Hope Parkinson Program provides support, counseling and other services needed for quality of life through knowledge, movement, creativity and fellowship – all important components of treatment for individuals and their care partners. Services include education, support group meetings, referrals for medical care, exercise and movement classes, creative arts classes and socialization.
No comments:

Debbie Prichard, Hope HealthCare Services director of staff engagement and a Senior Professional in Human Resources since 2000, recently received her recertification, a career-long commitment dedicated to mastering the core HR principles and staying current in the HR profession.

SPHR is the senior-most human resources certification for those who have demonstrated a strategic mastery and real-world application of forward-thinking HR practices. To earn the distinction, Prichard completed a rigorous exam focused on business management and strategy, workforce planning and employment, human resource development, compensation and benefits, employee and labor relations, and risk management.

Prichard previously served on the board of directors for HRMA of Southwest Florida.

Martha Bryson, SPHR, Hope HealthCare Services director of staff relations, has been appointed registrar for the HR Florida State Council, an affiliate of the Society for Human Resources Management.

Currently serving as treasurer, Bryson serves as part of the executive committee that governs the activities of the council, including the 2013 HR Florida State Conference & Expo.

A member of the Hope HealthCare Services team since 2003, Bryson is certified as a Senior Professional in Human Resources, a career-long commitment dedicated to mastering the core HR principles and staying current in the HR profession. She has held the position of secretary and was a two-term district director on the HR Florida State Council. Bryson previously served as president of HRMA of Southwest Florida and is a graduate of Siena Heights University in Michigan.

Representing more than 14,000 individual members, the HR Florida State Council is the state affiliate for the SHRM. Founded in 1948, SHRM is the world’s largest association devoted to human resource management. HR Florida State Council is a 100 percent volunteer entity whose primary objective is to support the mission and initiatives of SHRM through education, coordinating professional development efforts, and serving as the conduit for communication among SHRM and chapters as well as at-large members.
No comments:

With more than 30 years of experience in the medical field, Dr. Quigley will be responsible for providing care and support to patients and their families during end stages of life.

Prior to joining Hope, Dr. Quigley served as associate medical director with Tidewell Hospice and Palliative Care in Sarasota. She holds numerous certifications and licenses, including board certification by the American Board of Hospice and Palliative Care and the American Board of Emergency Medicine. She is certified to practice medicine in the states of Florida, New York, Vermont and Indiana. 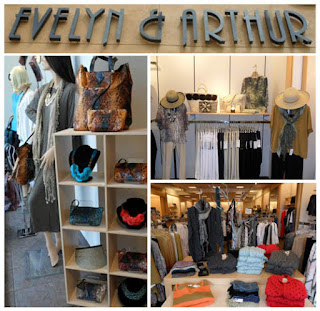 From October 28 – November 17, 2012, Evelyn & Arthur’s new Estero location in the Coconut Point Mall will collect gently used clothing and accessories as part of a donation drive for Hope Hospice. Merchandise collected at this Evelyn & Arthur location will be resold at Hope Chest, supporting programs and services that Hope provides to patients and families throughout Southwest Florida, regardless of their ability to pay.

This will be the second year that Evelyn & Arthur has partnered with Hope Hospice. Their first donation drive proved to be a huge success with shoppers donating carloads of clothing and accessories.

“We were overwhelmed by the outpouring of support the community showed for our first donation drive,” said Adrianne Weissman, president of Evelyn & Arthur. “We ended up extending the donation drive as shoppers continued to bring in donations day after day. We are incredibly grateful to our shoppers for their compassion and caring to support families at a time of great need.”

Those interested in supporting this donation drive are encouraged to bring gently used clothing and accessories to Evelyn & Arthur in Estero. Those who bring in donations will be treated to 10% off Evelyn & Arthur brand merchandise --  the offer is good until December 15, 2012.

For more information on this event, or to learn about Evelyn & Arthur boutiques, please call 239-949-4110 or visit http://www.evelynandarthur.com/
No comments: 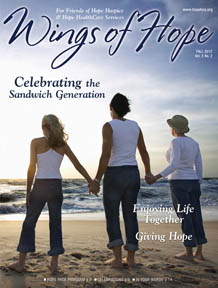 Read about Hope PACE, see event photos, discover upcoming fundraisers and get all the important news from Hope. Click the image above for the full version.
No comments:

Samira K. Beckwith, president and CEO of Hope HealthCare Services, has been named the 2012 Distinguished Citizen of the Year by the Southwest Florida Council, Boy Scouts of America. The award will be presented at a gala community event, which will include a silent auction, scheduled for Tuesday, Nov. 20, at the Hyatt Regency Coconut Point Resort & Spa in Bonita Springs.

“Throughout her career, Samira Beckwith has epitomized the extraordinary integrity, service to community, and impeccable character that this award is intended to recognize,” said Gary Trippe, co-chairman of the Distinguished Citizen Committee for the Southwest Florida Council. “Samira and her organization have a profound impact on individuals and families every day. She is a terrific role model for today’s youth.”

Beckwith joined Hope HealthCare Services in 1991, when the local hospice provider served fewer than 100 patients a day. Today, Hope cares for nearly 2,000 individuals in six counties every day, with a diverse range of programs and services, four state-of-the art inpatient facilities, numerous satellite offices, four PACE Centers, a staff of more than 1,000 and an active base of more than 1,200 volunteers.

Beckwith earned her bachelor and master’s degrees at The Ohio State University, where she received the Alumni Association’s highest honor, the Medalist Award, in 2009. While in graduate school, Beckwith – who immigrated with her parents to the U. S. from Lebanon when she was five years old – was diagnosed with Hodgkin’s disease. It was during her medical treatment that Beckwith dedicated her life to helping others live a better life, even during serious illness.

Throughout her career, Beckwith has served in leadership positions on the local, state and national levels, participating in public policy development and lending expertise on legislative issues. Beckwith has served both Gov. Jeb Bush and Gov. Rick Scott in health care leadership roles and currently serves as a national director for the National Hospice and Palliative Care Organization, chair of the board for the National Hospice Foundation and founding president of the Florida PACE Association.

The Distinguished Citizen “Good Scout” Award ceremony brings together civic-minded individuals and business leaders from throughout the Southwest Florida community in an event that recognizes and celebrates the importance of scouting in guiding and developing today’s youth.