Samira K. Beckwith Elected to Board of National Coalition for Cancer Survivors

Hope HealthCare Services President and CEO Samira K. Beckwith has been elected to the Board of Directors of the National Coalition for Cancer Survivors (NCSS).

NCCS is an advocacy organization that represents the millions of Americans who have lived with, through and beyond a cancer diagnosis.

“Having twice survived cancer, I feel strongly compelled to help others,” Beckwith said. “I am in a position to advocate for changes in how the nation researches, regulates and delivers quality care.”

Beckwith’s term on the NCCS board runs through 2014.
No comments:

Now is the Time to Give Hope: November is National Hospice Month

The month of November is the gateway to the holiday season. For many people, it is a time of love and giving. National Hospice Month, observed every November, is also an occasion for love and giving – and sharing Hope.

Hospice is truly a way of giving and sharing Hope, as it makes the journey less difficult for those in our care, along with their loved ones. Research continues to show that hospice care actually prolongs and improves a person’s quality of life.

The wife of a veteran in our care, married for 49 years, said to me, “My husband has seen battle, and now I have too. This has been the most difficult time of my life, and I needed you.” She let me hold her hand as she wept, and explained, “This isn’t really sadness. Our time together, our life together, was just wonderful.”

She had the support of our Hope Hospice care team, which provided expert medical care to keep her husband comfortable, enabling them to focus on the quality of their time together. Emotional and spiritual support for the entire family ensured their wishes and preferences were always the priority.

National Hospice Month is a time to raise awareness of everyone’s need to discuss their wishes and views for care during a serious illness. This is one of the greatest gifts that we can each give to those we love. And after these discussions it is important to document these wishes in a living will, also known as advance directives, as well as the designation of a health care surrogate. When complete, this simple document states your future healthcare wishes and preferences. In the event you become unable to speak for yourself, your family will be informed of your choices.

We encourage everyone to give hope by supporting others – loved ones, friends, neighbors - who are coping with serious illness. There are many ways to help that are simple and easy, yet will be greatly appreciated:
We’ve learned through our experience that even the smallest gestures of care can be the most meaningful and lasting.

Hope can help. To learn more, please visit hopehcs.org, or call (800) 835-1673. Hope encourages everyone to complete an advance directives document. “Five Wishes” includes all the necessary documents and is available on line at no cost at hopehcs.org/fivewishes or by calling (239) 985-7789.
No comments:

Not because it was an entertaining movie, which it was.

Not because it was a moving tribute to the best and worst we humans have to offer, which it was.

Not because the guy got the girl in the end and vice versa, which is what happened.

Not because the quality of the writing, the acting and the photography were excellent.

The movie is about a cancer patient, but it is more about dying and what the possibility of dying does to our lifestyle, our relationships and our psyche.

It spurred in us a discussion of what we want when we are dying.

Our talk went beyond the legal stuff.

Sure, we have a living will. We haven’t paid much attention to it and filled out the forms by necessity, not after enough reflection.

Sure, I have long-term insurance to pay for a nursing home. Sure, the government will provide somehow if the insurance isn’t there.

But what do we want from each other? And from other members of our family?

Janet doesn’t like people around when she is ill. Like a deer, she wants to lie in a thicket and lick her wounds.

But, we discovered as we continued to talk, it isn’t that simple. She wants me somewhere near. She wants to know that my presence is there and that I am available.

I discovered that I wanted two things: Not to be totally alone and not to burden Janet. I know Janet will find it hard to honor that second wish, but it is real and she needs to make it a major part of her decisions.

I recommend more than seeing the movie. I recommend that estate lawyers use it at seminars, that hospitals make it available for groups and that the hospice people offer copies to families of a newly admitted patient.

Because our discussions, while long, haven’t ended.
No comments:

Wedding Gowns Abound at Hope Chest: 150 from “Love That Dress”

The holiday season is a popular time to pop the question, and Hope Chest, the Hope resale store, is ready to serve the bride-to-be.

Among the new and gently used items donated to the “Love That Dress” event earlier this year were 150 wedding gowns, from the simple to the extravagant, ranging in size from 4 to 26. The event was held by the Lee County PACE Center for Girls.

Through a joint partnership between the PACE Center for Girls and Hope PACE (Program of All-Inclusive Care for the Elderly), the gowns are now available at Hope Chest, in North Fort Myers, at a fraction of their original prices.

The two organizations are unaffiliated although they have much in common, as they both focus on adding quality to the lives of others. While the PACE Center supports young women, Hope PACE helps people 55 and older to live in good health, safely and independently.

When Anna Ellis finished nursing school, she decided to join the service. She boarded a trolley in her hometown of Mahwah, New Jersey, planning to enlist at the first recruiting office she passed. She joined the Navy.

Now in the care of Hope Hospice at age 88, the Hope Honor Guard conducted a ceremony to thank Mrs. Ellis for serving her country. Honor Guard members are Hope volunteers and fellow veterans.

Veterans in Hope’s care are honored with a special ceremony and the presentation of a Certificate of Appreciation. They are also invited to participate in the Library of Congress Veterans’ History Project recording wartime stories.

“We have always had a special place in our hearts for veterans, and VALOR confirms our deep commitment to them,” said Hope President and CEO Samira K. Beckwith. Hope Hospice was recently honored by the National Hospice and Palliative Care Organization for “outstanding dedication to serving Veterans.” Beckwith added, “Our VALOR program was developed to provide the support and respect that America’s veterans, men and women, deserve.”

Along with the Certificate of Appreciation, the Honor Guard presented Mrs. Ellis with a specially made camouflage teddy bear. 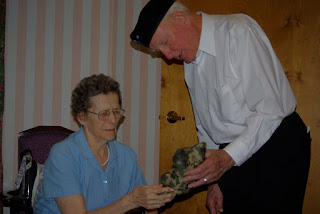 Hope Honor Guard member presents Anna Ellis with a specially made camouflage teddy bear in recognition of her service to the country as a Navy nurse. 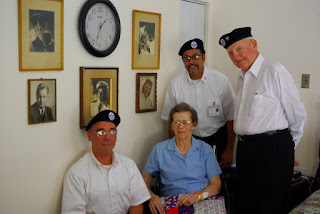