Florida Gulf Coast University has taken the LEED to ensure its campus and the buildings on it are green-friendly.

The university is following a national trend of sustainable development, under guidelines set by the U.S. Green Building Council.

The purpose behind LEED, or the Leadership in Energy and Environmental Design certification system, is verification that a building is designed and built to save energy, increase water efficiency, reduce CO2 emissions, improve indoor air quality, and demonstrate stewardship of resources.

It goes up by credits and guidelines met, from basic certification to LEED silver, gold and finally platinum.

Achieving LEED certification was a a key element in the school's signing of the American College and University's Presidents' Climate Commitment, a promise by the institution to take "actions to make climate neutrality and sustainability a part of the curriculum and other educational experience for all students."

"It's very exciting," Henry said. "Instead of saying it was too much money, architects to the majority of workers in construction all backed this, saying it was the right thing to do."

Even the building's landscaping was designed to be drought resistant and incorporates native and Florida-friendly plants that will need no watering once they are established.

FGCU is not alone in its quest for LEED certification.

The 46,604-square-foot Hope Hospice center on Beth Stacey Boulevard in Lehigh Acres was completed earlier this year. The Kraft Construction project was built with sustainable practices and has been submitted for LEED certification.

Folks with Hope Hospice are waiting to hear about certification on its recently completed center on Beth Stacey Lane in Lehigh Acres.

The 46,604-square-foot project was built with sustainable practices and includes a 10,000-gallon underground storage tank and backup emergency generator, enabling the facility to safely operate for several weeks during emergencies, such as hurricanes.

There's also solar-powered signage at the entrance to the center, another way to conserve energy.

"When we planned the construction of the Hope HealthCare Services Center, we wanted it to be energy-efficient and environmentally friendly," Beckwith said. "We wanted to be good stewards of our resources."

LEED certification is not just for academic buildings and hospice centers. Restaurants, cafes and grocery stores, it seems, are in an all-out race to be green.

A Subway shop in Chicago -with its tile, crown molding and most wall coverings made from recycled materials - is a first of its kind in a major city for the chain. In the bathroom, sensors control water flow, timers manage lights, and the toilet has a low-flow option. A smart air-conditioning system normalizes temperature between the bread ovens and the eating area.

A Dominick's grocery store, also in Chicago, has been rebuilt from the ground up with sustainability in mind. The store, in the Lincoln Square neighborhood, features high-tech, energy-saving equipment, such as heating and cooling systems tied into sensors that normalize temperatures from the bakery to the frozen-foods section.

Starbucks, meanwhile, has vowed all of its new, company-run stores will meet the U.S. Green Building Council's LEED standards by year-end.

A variety of factors have encouraged green buildings.

Subway and Dominick's, which is a division of Pleasanton, Calif.-based Safeway Inc., cite a slight improvement in the economy, and some cities, like Chicago, have streamlined the green permitting process.

Subway and Dominick's, which is a division of Pleasanton, Calif.-based Safeway Inc., cite a slight improvement in the economy, and some cities, like Chicago, have streamlined the green permitting process.

But, most important, stores almost need to go green to retain and grow their customer base, said Robert Passikoff, founder of Brand Keys, a consultancy that measures customer loyalty. He said consumer interest in a corporation's environmentalism is five times greater than it was a decade ago.

"It's one of those things you can't ignore," Passikoff said. Green buildings, he said, resonate with consumers even more than corporate pledges to recycle or purchase carbon offsets. All things being equal, the customer will choose the green company, or the milkshake from the green restaurant, he said.

From a business perspective, motivations for building green appear to be threefold: energy savings, customer goodwill and marketing.

Passikoff noted that going greener is just the first step.

"The issue isn't just doing it, but doing it believably and communicating it believably," he said. "Right now, if I told you BP is doing a heck of a job with the environment, would you believe me?"

A company's commitment to going greener, he said, "should be part of the entire brand equity approach," integrated into everything from advertising to public relations.

Savvy retailers such as Starbucks know this and believe it's a reason customers may pay more for their coffee. The chain also certifies free-trade coffees and touts its relationships with farmers in the world's coffee-growing regions. Its store-design strategy has become another extension of the same message.

Dominick's sees a link between going green and building goodwill.

"A lot of what we've done is based on requests from consumers," company President Don Keprta said during a recent tour of the store. "Everyone is very conscious of the greening of the country." 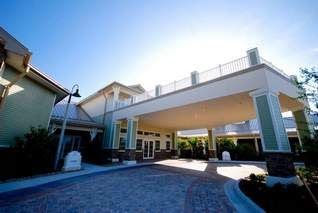 The 46,604-square-foot Hope Hospice center on Beth Stacey Boulevard in Lehigh Acres was completed earlier this year. The Kraft Construction project was built with sustainable practices and has been submitted for LEED certification. (Special to news-press.com)