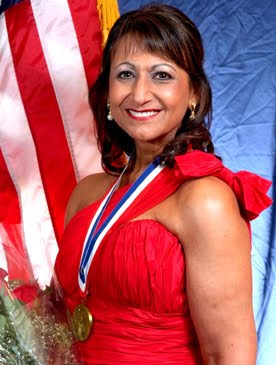 Recognized for Her Contribution to the American Way of Life

The National Ethnic Coalition of Organizations Foundation has named Samira K. Beckwith, President and CEO of Hope HealthCare Services, as a recipient of the 2010 Ellis Island Medal of Honor. The medal is presented to distinguished Americans who “represent the very essence of the American way of life, having greatly contributed to our national identity while preserving the distinct values and heritage of their ancestors,” according to the Foundation.

As a young child, Samira Kanaan immigrated with her family to the United States from Lebanon, seeking the American Dream. From her professional beginnings as a social worker, she has become a prominent leader in health care on the local, state and national levels.

The Foundation points out that the Ellis Island Medals of Honor have been aptly named, “for the island is a symbol of diversity of our nation’s people – a people whose genius, culture, artistry and thought have joined to form a single mosaic of many cultures and ancestral backgrounds.”

The Ellis Island Medal of Honor ranks among the nation’s most prestigious awards. The US Senate and House of Representatives have officially recognized the honor, and each year the recipients are listed in the Congressional Record.

“My cultural heritage is an incredibly beautiful gift from my Mother and Father,” Beckwith said. “Coming to America, my parents sought a higher quality of life. Growing up, I was richly rewarded by their sacrifices. I cherished their ideals. My desire to help others live a life of quality is the foundation of my career in health care. I am humbled by this accomplishment and recognition; my parents would be very proud.”

Beckwith was nominated by Fred Pezeshkan, a previous medal recipient. Pezeshkan is CEO of Kraft Construction Company and a member of Hope’s Board of Directors.

The medal was presented during a ceremony on Ellis Island in New York, the historic gateway for millions of people from around the world who sought to become Americans.

The Ellis Island Medal of Honor was established in 1986 by the National Ethnic Coalition of Organizations Foundation, Inc. (NECO). The creation of NECO was based on the conviction of its founders that the diversity of the American people is what makes this nation great. Its mission is to honor and preserve this diversity and to foster tolerance, respect and understanding among religious and ethnic groups.
No comments:

Sweeten the Day for Mom and Give Hope to Others

Hope Hospice and Norman Love Confections have created a special offering for Mother’s Day as sweet as Mom herself. This year, Mother’s Day orders placed through Norman Love’s website are even sweeter: For every order placed at www.Hope.NormanLove.com, Love will contribute five percent of the sale to Hope HealthCare Services.

These donations will help Hope continue its mission of providing high-quality, innovative services to families throughout Southwest Florida, including hospice care, according to Samira K. Beckwith, Hope’s president and CEO. “Mothers provide steadfast comfort and care for their families even through difficult times, just like Hope does for those in our care,” Beckwith said. “It’s a special privilege to have this generous support from Norman during the Mother’s Day holiday. We truly appreciate the partnership.”

Love, the Fort Myers-based award-winning chocolatier whose creations are shipped nationwide, established the partnership with Hope in honor of his mother, who was cared for by hospice prior to her death in 1989. Hope Hospice plays such an important role in families throughout the community, and it’s a cause that’s important to me personally,” Love said. “We’re pleased to partner with Hope and to give our customers the opportunity to support the organization.”